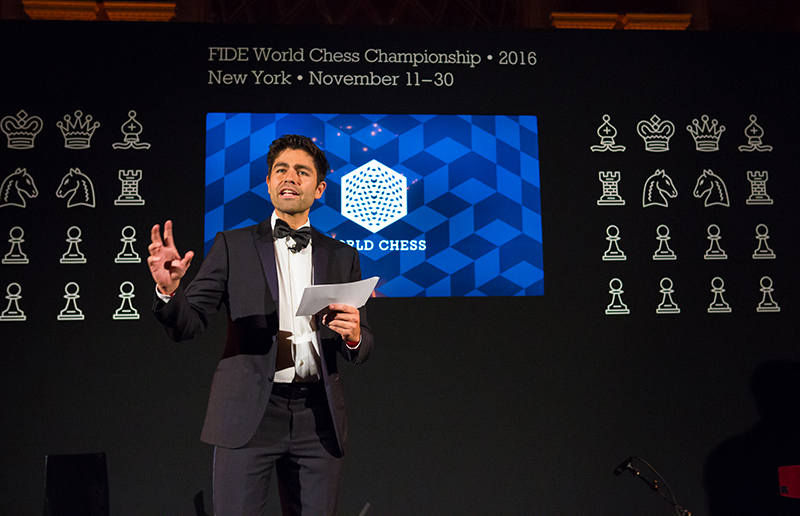 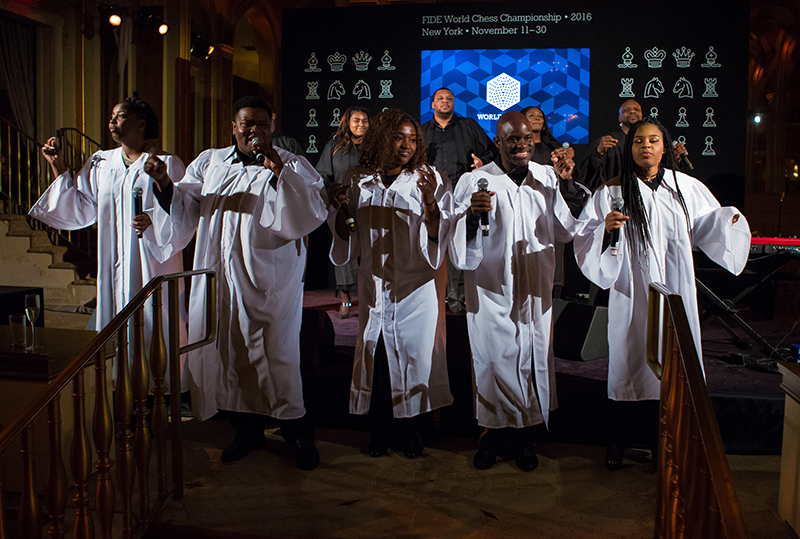 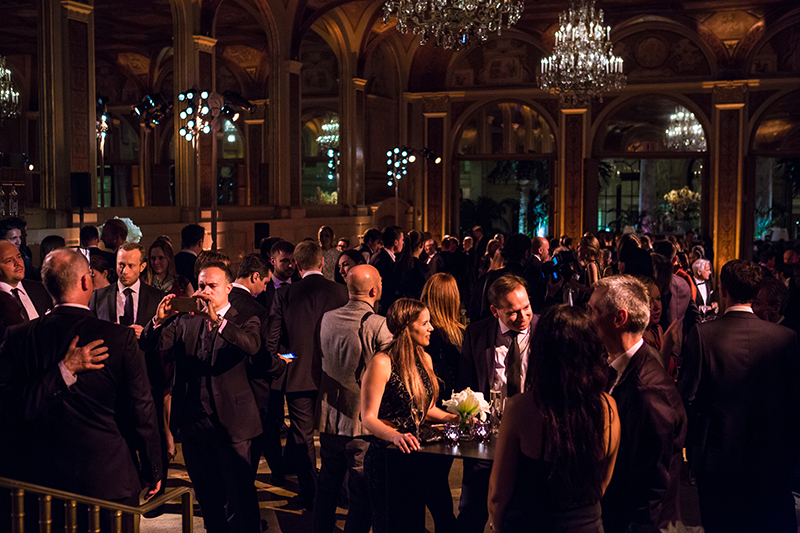 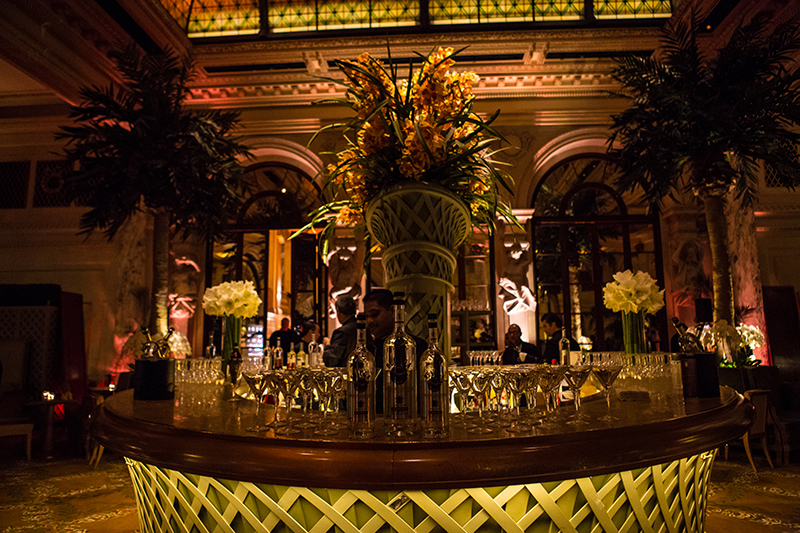 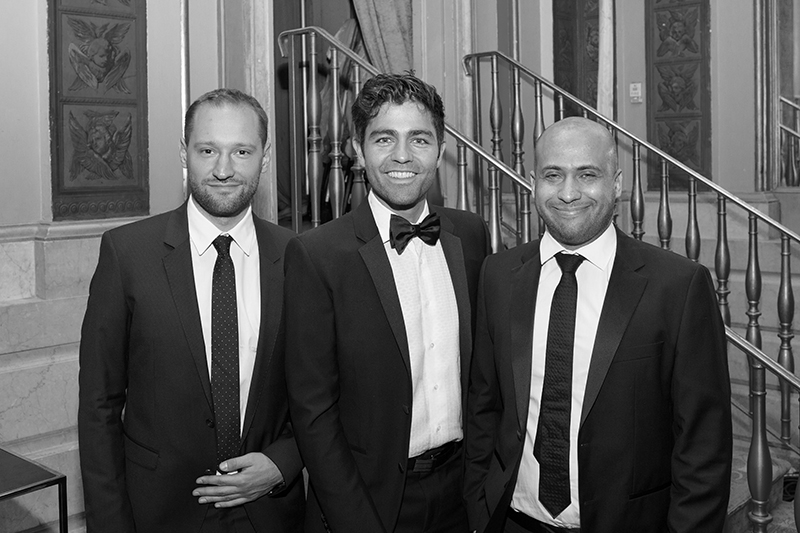 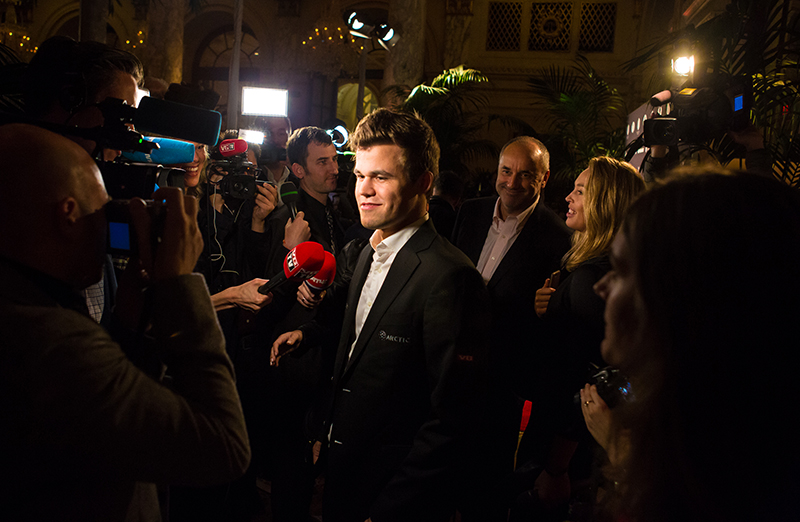 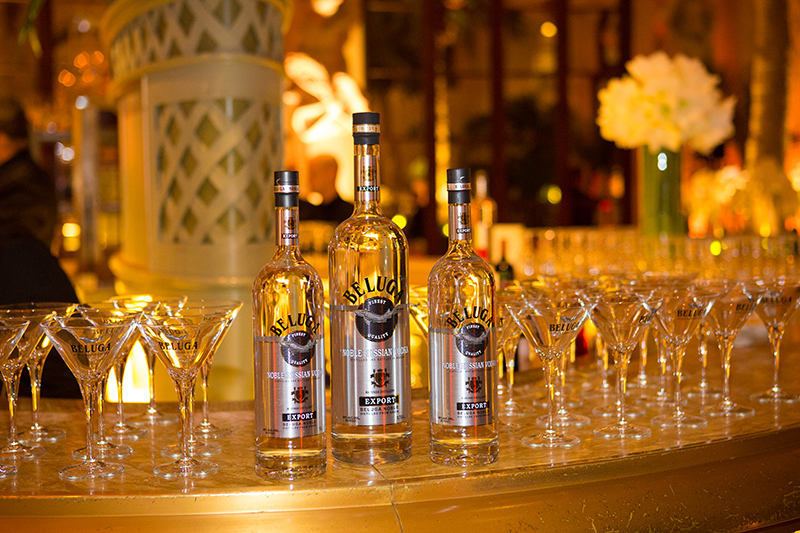 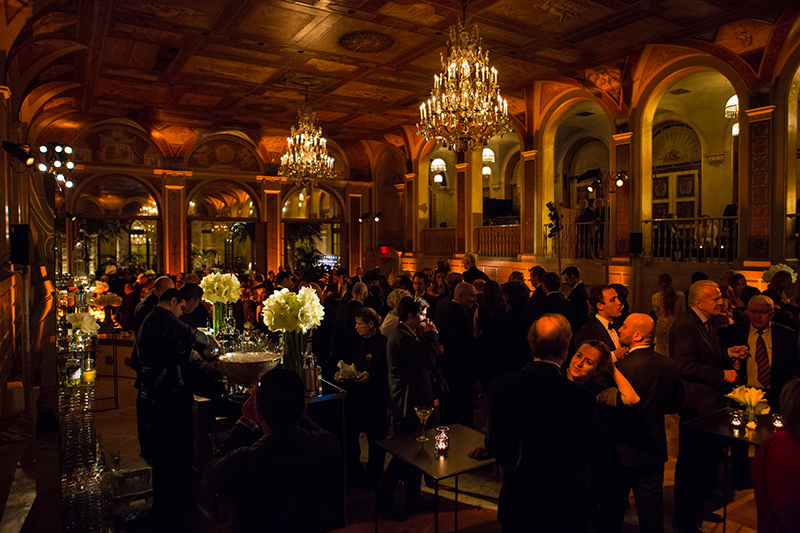 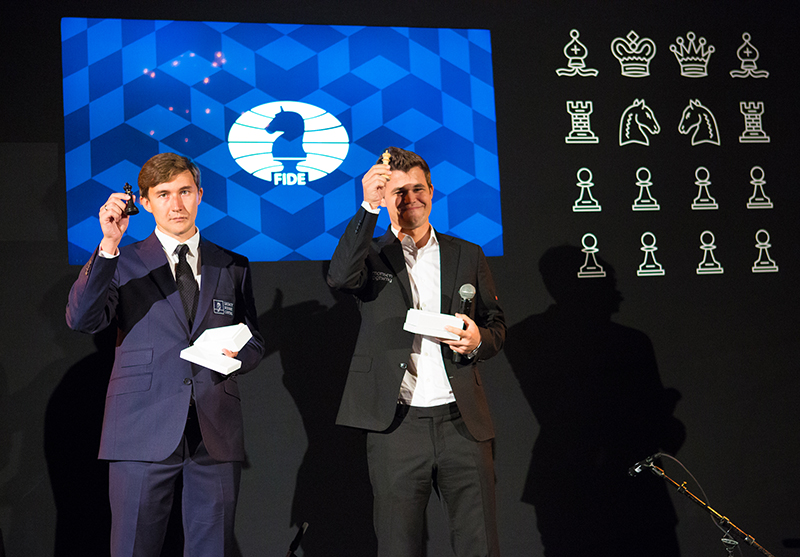 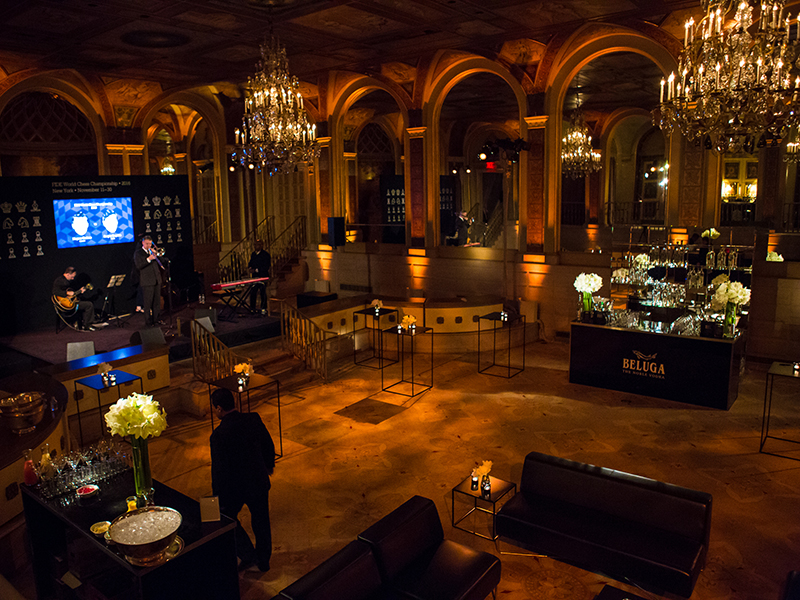 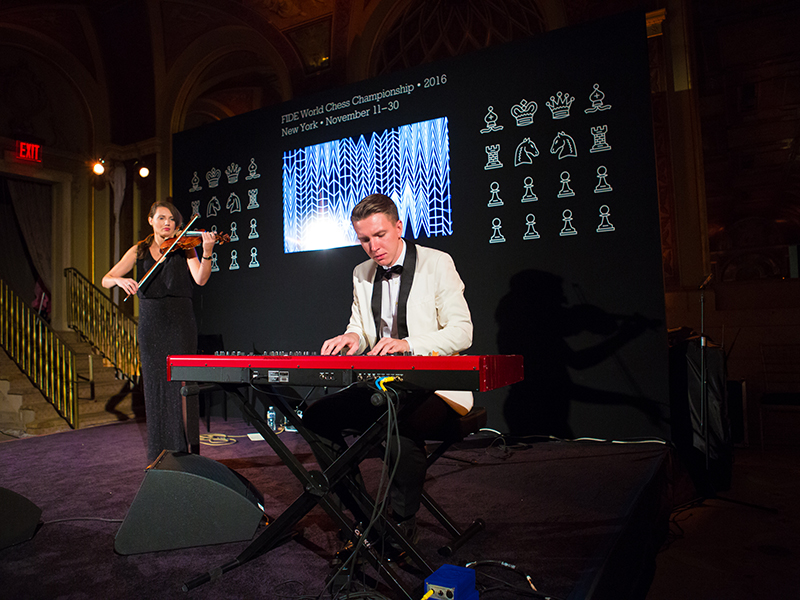 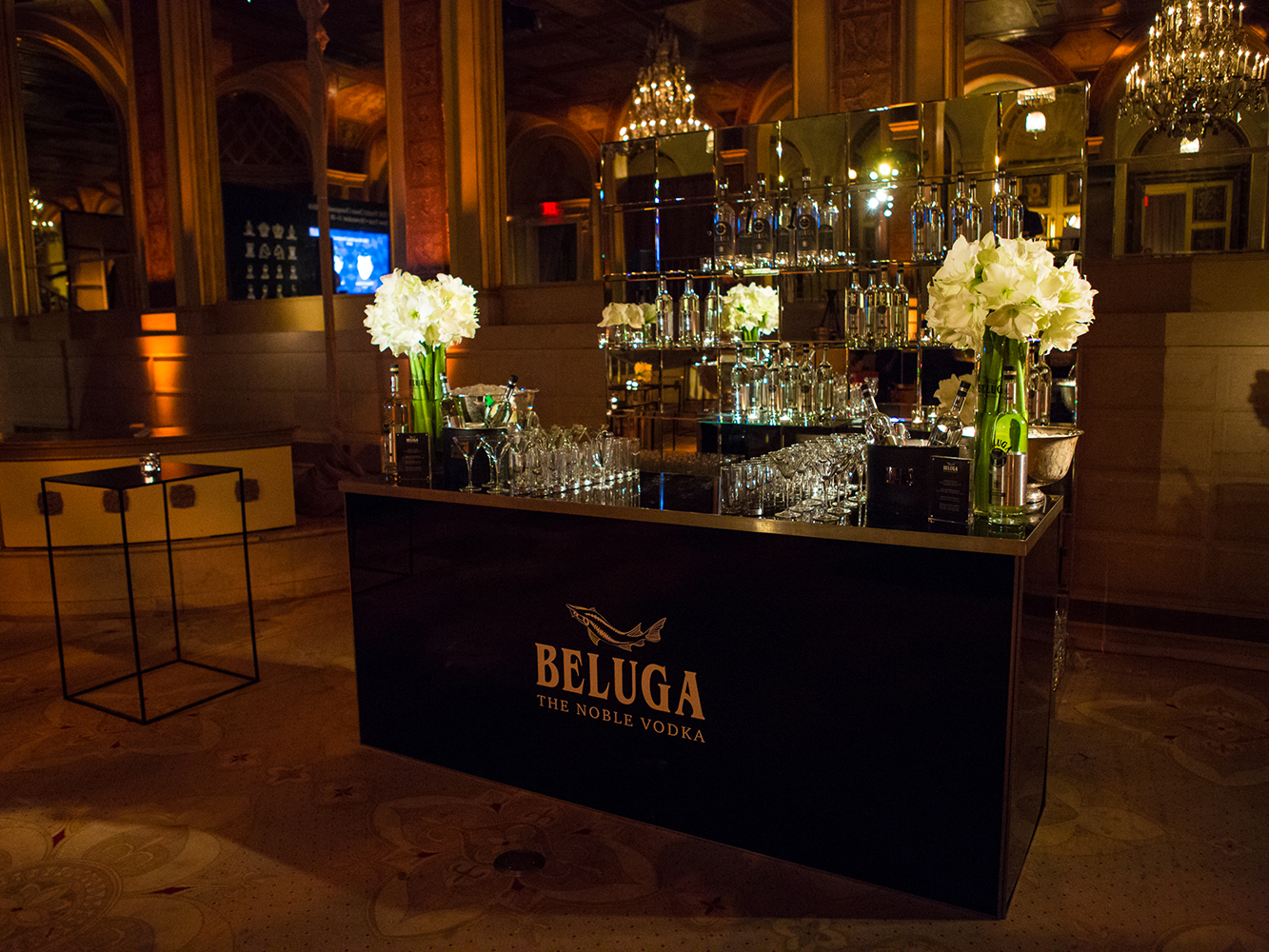 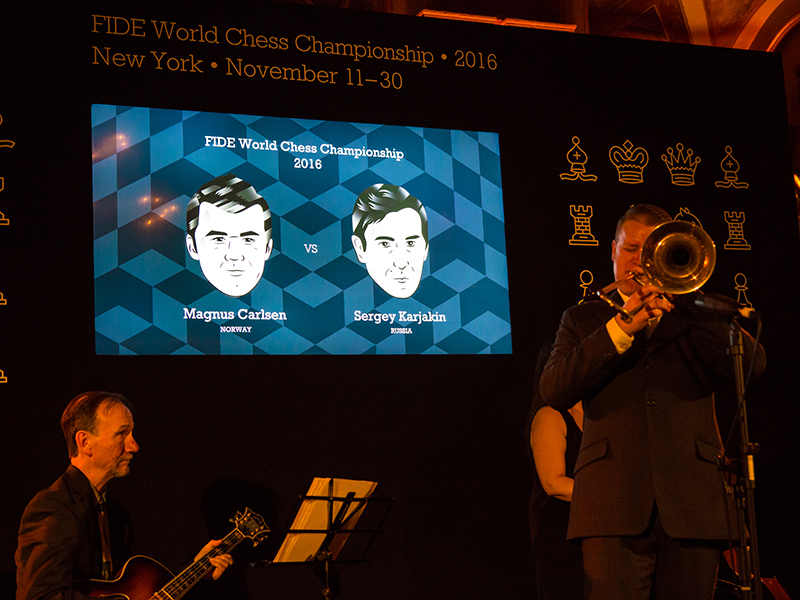 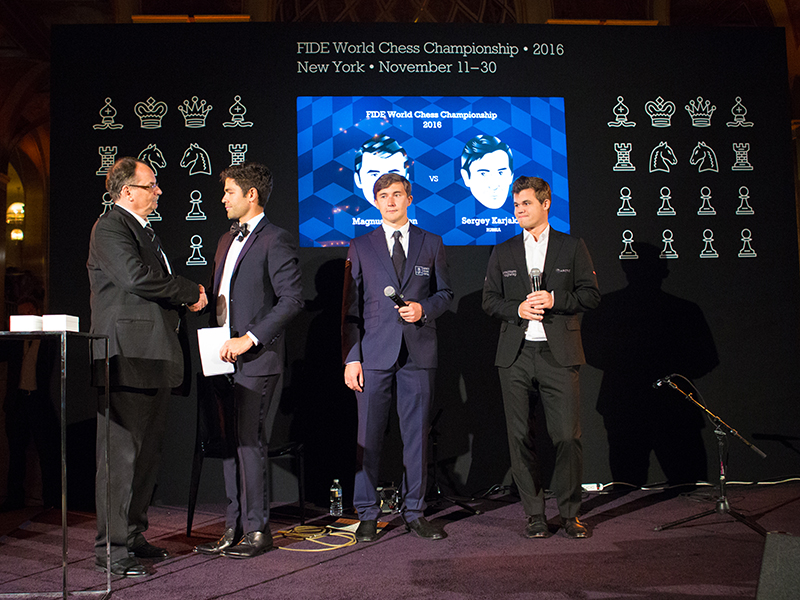 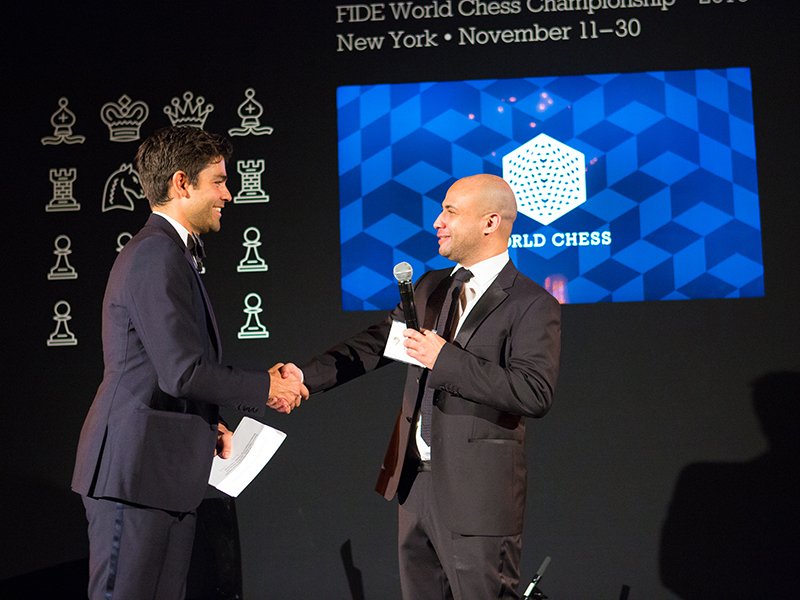 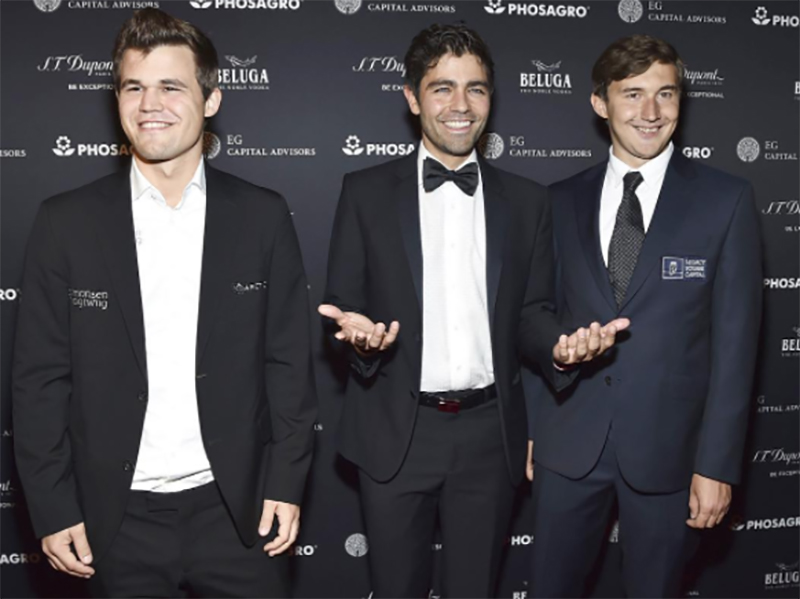 Returning to New York City for the first time in 20 years, the World Chess Championship celebrated the competition with a splashy Opening Ceremony at the iconic Plaza Hotel.

Hosted by actor, director, producer, and chess fan Adrian Grenier, the reception was decked out in a classic black and white theme, a subtle nod to Truman Capote’s famed Black & White Ball held in the same venue 50 years ago.

The highlight of the evening was the introduction of the competitors, Magnus Carlsen of Norway and Sergey Karjakin of Russia. The guests were thrilled to meet the youngest competitors in tournament history, at 25 and 26 respectively, and were privy to the official Draw Ceremony, granting Magnus Carlsen the first move at the next day’s game.

Joining the players on stage were the President of World Chess, Ilya Merenzon, FIDE Vice President Israel Gelfer, as well as sponsor representatives Michael Stanton (EG Capital Advisors; Member of the Supervisory Board), Andrey Guryev (CEO and Chairman of the Management Board PJSC Phosagro), and Megha Malagatti (Global Communications Director of S.T. Dupont), all of whom enjoyed an intimate VIP reception in a Penthouse Suite immediately prior to the stage program.

Guests were also treated to unique musical performances by Russian pianist Nikola Melnikov and Norwegian violinist Isa Caroline Holmesland (of the Oslo Strings), both of whom came to New York specifically for the event to symbolically represent the battle between the two players' home countries.

The stage program concluded with one final iconic New York element – a surprise performance by the world- famous Harlem Gospel Choir, decked out in black and white robes inspired by chess pieces, extending the festive theme of the evening. Guests enjoyed the performance while sipping custom cocktails made with Beluga Vodka, a sponsor of the event.

This year’s World Chess Championship took place from November 11-30 at the Fulton Market Building in Manhattan, where after almost 3 weeks of play, 12 games, and a day of tie breaks, Magnus Carlsen retained his title as the World Chess Champion which he has held since 2013.

For those not in New York but who still wanted to experience the event, the championship was the first sporting event broadcast in VR.

Additional information about the tournament and upcoming events can at https://worldchess.com/nyc2016/.